One of my favourite things about Sutton is Nellie’s, the community café that runs twice a month from 10am to 2pm. On the second Wednesday of each month it’s at the School Community Room, and on the last Friday of each month it’s at Scott Court. I popped in this morning for my usual bacon sandwich, which was as good as it always is. And I was very pleased indeed to find a couple more volunteers willing to help my election campaign – thank you very much!

The candidates for the Sutton division in the county council election on 2 May have now been announced.  In addition to myself as the Liberal Democrat candidate, sitting councillor Philip Read is standing for the Conservatives once again, and there’s a Labour man too. There’s no UKIP candidate, and no Independent either – just the three of us. We all live in Sutton; I’m the only woman. Your choice!

The Sutton division includes the parishes of Coveney, Downham, Mepal, Sutton, and Witcham – so it’s quite a big area. If you’d like to help my campaign by delivering a few leaflets, or putting up a poster in your window or a stakeboard in your garden, or in any other way, please let me know! Use the How You Can Help link at the top of this page.

There’s still time to apply for a postal vote for this election – or to get on the register to vote if you’re not on yet. That’s all handled by East Cambridgeshire District Council, and the deadline is Wednesday 17 April.

I only passed my driving test 16 months ago, so I know what it’s like to rely on local buses. That’s why I’m particularly concerned at the decision by Cambridgeshire County Council to cut £2 million a year from financial support for buses across the county.  This will result in the removal of many bus services that don’t have the passenger volume to make a profit but are still important to our communities.

The hourly bus service to Sutton has been reinstated after last year’s cutback to every two hours. A two-hourly service was dreadful, especially for interchanges to trains at Ely. But the result of having our hourly service restored is that the No 9 bus now terminates at Chatteris instead of going on to March. And with no buses at all in the evenings and on Sundays, much of the great entertainment on our doorstep in Ely and Cambridge is inaccessible for Sutton residents without a car.

Meanwhile the county council is axing its support for the 125 bus service to Ely which serves Pymoor and Little Downham.  This attracts over 11,000 passenger journeys a year, and cutting it will save less than £30,000 a year.  This is a drop in the ocean compared to the amounts of money (£2 million a year in interest alone!) that the county council is pouring into its guided bus. Let’s not forget, too, that the county council promised us that the guided bus project would cost taxpayers nothing; in addition to those interest payments, it’s already paid £5 million to lawyers in its dispute with contractors BAM Nuttall that could see up to £187 million of local taxpayers’ money at stake.

When the county council made its decision to cut local bus services (the worst bus cuts in England), it also promised us that there would be a shiny new alternative scheme called ‘Cambridgeshire Future Transport’ that would rush in to fill all the gaps and provide wonderful and innovative new public transport services. My colleague Cllr Susan van de Ven, Liberal Democrat transport spokesman on Cambridgeshire County Council, has documented the failure of that scheme. An initial Cambridgeshire Future Transport project in Duxford produced just one passenger and cost the taxpayer a staggering £160,000.  That sum that could have kept the 125 service going for residents of Pymoor and Little Downham for more than five years. 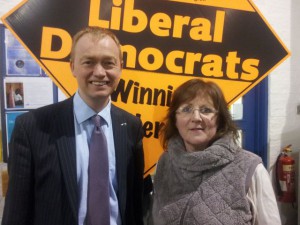 Thursday 2 May is polling day in the elections to Cambridgeshire County Council. Sometimes it’s not always possible or convenient to get to the polling station on the day, or something might crop up. So why not apply for a postal vote? Your ballot paper arrives on your doormat about ten days before the election, and you can complete it in the comfort of your own home and post it back. Visit the council’s web site to download your application form. Applications must be received by the council no later than Wednesday 17 April.

Wednesday 17 April is also the deadline to apply to be on the electoral register if you’re not already listed as a voter. You can also download the form for this from the council’s website.